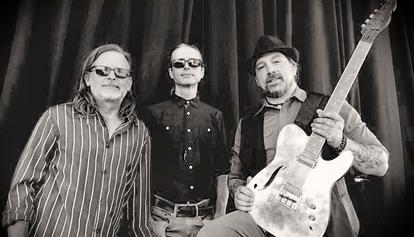 Roots rock with a twist of throw back country flare, eclectic swing, and beautifully penned story songs sum up this energetic northern Minnesota 3 piece. The Christopher David Hanson Band is known for shows that bring out the dancers, fellow musicians, and live music lovers of all ages.
Christopher David Hanson has a powerful and stormy soulful voice that hits you right in the heart. The lyrics never take a back seat, even in some of their more guitar driven songs. The musical rhythms and song oriented drumming of Jim Pietila paired with the full and thoughtfully thunderous bass playing from Shane Kinsland round out the group with a huge sound that covers a varied span of styles, feels, and familiar grooves.

Also a Nashville recording artist, Christopher has worked with many members of Wynonna Judd's band, and  Carrie Underwood's group. The Band has released 5 full length studio albums available nationwide on every major online platform including; Itunes, Amazon, Google Play, CDBaby, and Spotify. With their own Pandora station, you can hear them anytime, on any device, as easily as searching their name on your phone.
Find them on facebook and visit their website for show details and scheduled events:
christopherdavidhanson.com